Fourth and Final Year in Review

As each year in Switzerland came to an end, I've written a post looking back on that year. This post is similar, but also different because this is the final chapter.  I knew the day to leave our adopted country would come and it would be sad. It is also appropriate to remember and celebrate the opportunities we have had and the friendships we've made.

In this fourth year, I continued to watch for new Swiss festivals to attend. I do not expect to experience these events anywhere else. Here are the highlights/new ones of 2015-2016:


Silvesterclausen, January 2016, a unique way to celebrate the new year 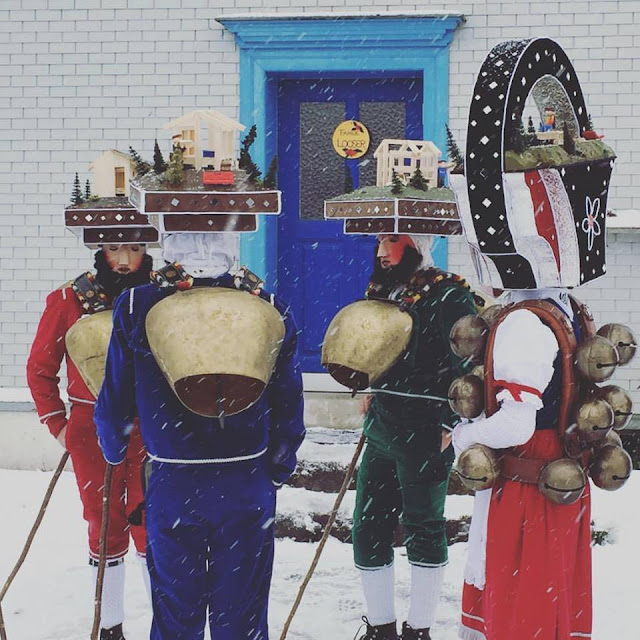 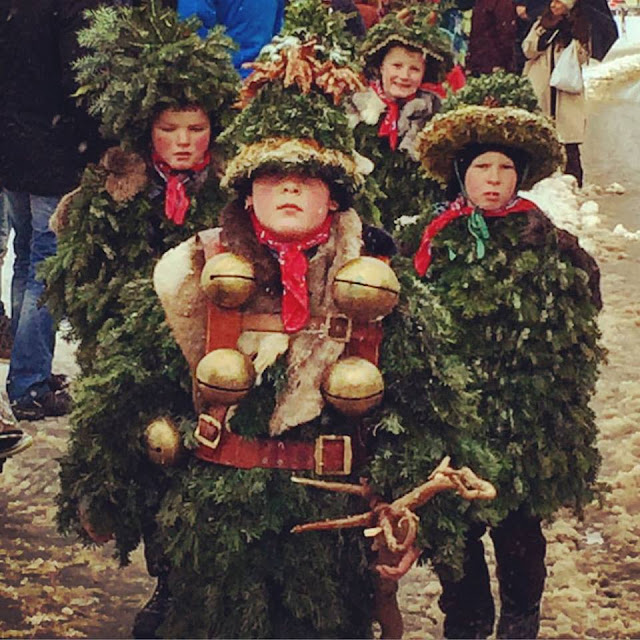 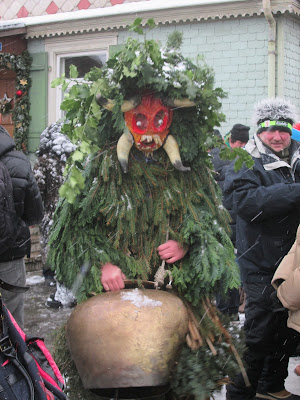 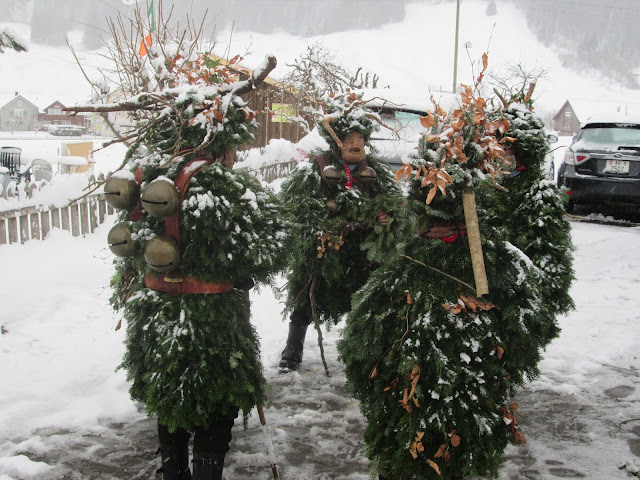 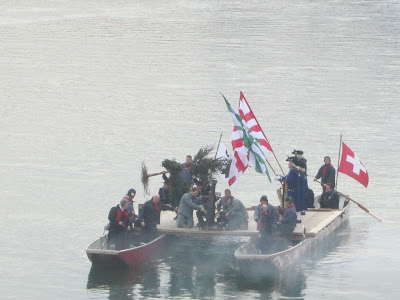 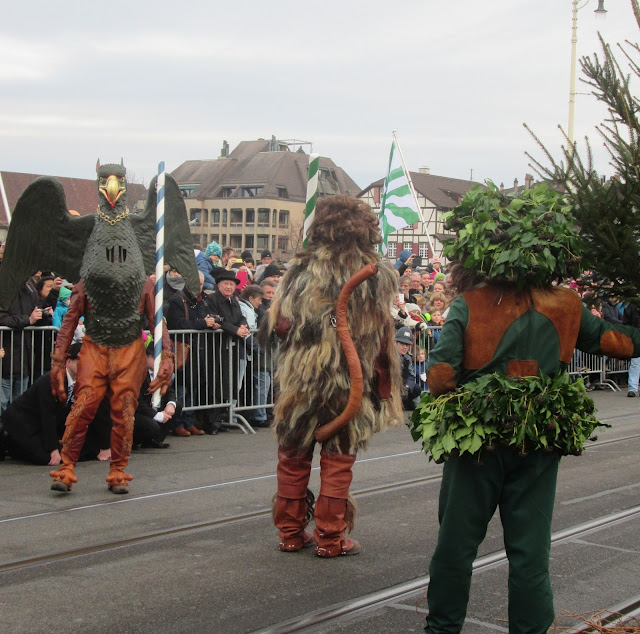 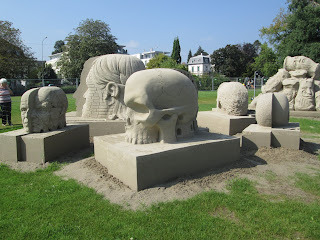 Visitors enjoy Swiss festivals as much as we do! When my sister and brother-in-law came, their visit was perfectly timed to coincide with the annual parades of the cows coming home from the mountains. It's not just cows, there's a little bit of everything. 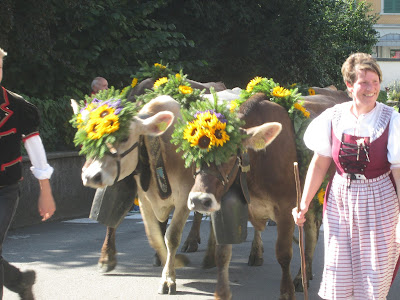 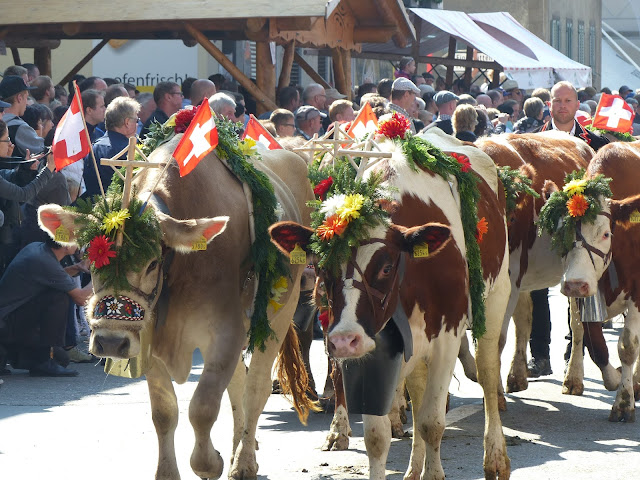 When Lynn visited, we went to Olma, a huge agricultural fair that takes place for about 10 days. Think county fair, but on a much larger scale. 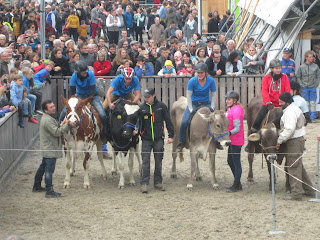 The cow races are different than what I'd seen before at the "Kuhrennen" in Flumserberg. Here they started with 12 cows and had heats of four running at a time, then the semifinals and final race. In total, it took about 45 minutes because there was a lot of talking by the announcer between heats.


The cow races were well attended, but there was space enough to watch comfortably. Not at all the case for the pig races! It was mobbed! I'm guessing it's because people had bet on their favorite pig and wanted to see whether they won anything. Craziness! 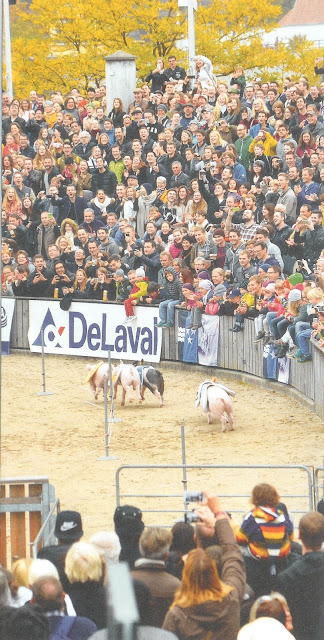 See the crowd? That's why I did not get better pictures. This is a scan from their brochure.

In October, I had my second opportunity to spend the day at the Swiss Indoor Tennis Tournament in Basel. It's only a little over an hour's drive away and very high quality players attend. Good stuff, especially with good friends.

I considered making my tennis friends guess who the players are, but since the photos aren't the best, I'll provide captions.

The people behind us were probably very amused while we tried to take a decent selfie. There were many failed attempts!


I may have liked watching the doubles the best. It was on a court with a very small amount of seating which means every seat was close to the extremely fast paced action.


Our visitors this year all came between July and October. In July, we had two couples come together. They toured mostly in Germany and stopped here as their last port of call.

Only three of us went up the cable car in Arosa to the top of the Weisshorn. 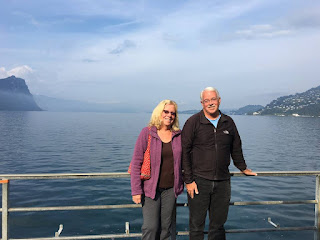 With Karen and David, we went for a boat ride and visited Luzern. 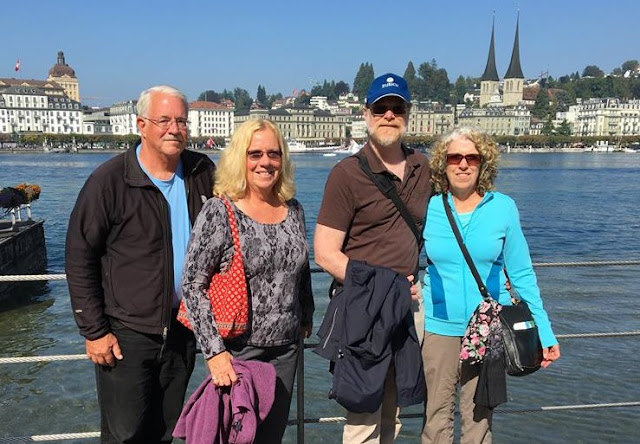 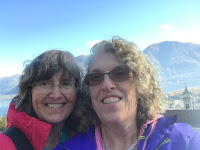 Lynn was our last visitor before our departure from our temporary homeland. Together, we got to some places I hadn't been before. 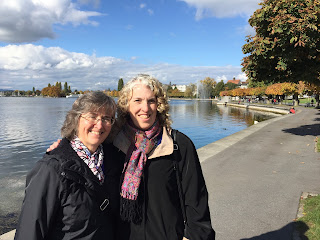 I'd been to Zug before, but never with a tour of the old town. I'd also never had a demonstration of or tasted the famous (at least in Switzerland) Zuger Kirschtorte. It was fun, but the cake isn't really anything special. (Black Forest cherry cake is much better.) The kirsch is made only from cherries from the Canton of Zug.


The colorful display behind us is all seasonal produce. In the center was a Swiss cross, but not much of it is visible in the picture. 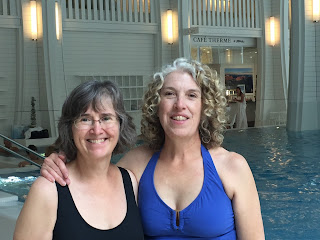 When faced with a rainy day, a trip to a spa in Bad Ragaz was a very nice option.

Over the past year, I continued as a regular with the Tuesday morning walking group and an occasional participant in half-day hikes, both with ZIWA.

Indoor tennis conflicts with these hikes making me only participate after the tennis season is over. On a typical week, I played tennis on both Thursdays and Fridays indoors. In the summer, we also added an outdoor clay opportunity which was also fun.


The ZIWA tennis ladies held a farewell potluck luncheon for me. So much good food prepared by people from all over the world. Our Tahitian member made a floral lei for me and our host, Deb.


I didn't take any formal German classes during the last year, but I did go regularly to conversation groups. I continued to go right up until the end. Why? Because it was a fun group of people and I didn't want to give it up before I had to. I will leave Switzerland without the fluency I would have liked, but obviously I wasn't willing to put in the necessary time to make that happen. My listening and reading comprehension is still good, but speaking is far less accomplished. I hope I can motivate myself to at least maintain what I worked hard to learn.

One new experience during 2016 was a ride on Lake Zurich in a private boat. Our ZIWA tennis coordinator, Helen, owns a boat and invited us to join her out there. I'm so glad I accepted the invitation. It's very quiet and peaceful out there. Helen put down the anchor and we swam from the boat.


I spent most Monday evenings with the Posaunenchor of the Adliswil Methodist Church. Musically speaking, it's not the best group. In all other categories, it is a very special group. They welcomed me into their midst even without a firm handle of German, especially Swiss German. They are strongly committed to one another and I feel very lucky to have been accepted as a member of the group. My last Sunday with them was an emotional one for me. I played a duet with Luca, a young horn player whose mother and I sung the Faure Requiem together in 2013. During the service, the minister presented me with a candle with a picture of the church on it. Saying "auf wiedersehen" to fellow musicians after the service was tough.

After four plus years, we have left Switzerland and are back in the USA. Initially a big surprise to us was the offer of a new role for Tom in Los Angeles! What? That was not ever a destination we considered or expected. After getting over the shock, the offer was accepted.

I knew the time would come to leave Switzerland and expected it to be sad. I was right; it is sad, but that doesn't mean I regret coming here in 2012. I feel like anywhere that is a good place to live is hard to leave when the time comes. Just ask Alicia, we both cried when we left Belgium. I am grateful for the opportunity to live in such a beautiful country these past years and will take many fond memories with me. I was honored to meet and share the journey with other women from many other home countries - such an enriching experience.

But "to be honest" (an annoying pet phrase of some people), I won't miss everything about Switzerland. I won't miss the outrageous prices for most everything from food to gasoline to rent. I won't miss my tiny oven, washing machine and a dryer that takes an eternity to make my towels warm and damp. I won't miss some of the strict rules: Is it really necessary for the post office and pharmacy to close at lunchtime when that is the most convenient time for some people to get their errands done? Is it really such a sin to recycle on Sunday? I will not miss my neighbor, Natalie, who did not like me to practice my horn in the apartment and made sure I knew when the (holy) lunch hour and other silent times were. In our repatriation, I am hoping for a garbage disposal and screens!


There are many more things that I will miss. I will miss the incredible beauty of Switzerland with scenic views nearly everywhere you look, starting with the view from our apartment.

Here are some other views from day trips that didn't earn a spot in another blog post because there just wasn't time. I anticipate other day trips in CA - I just have no idea what and where. 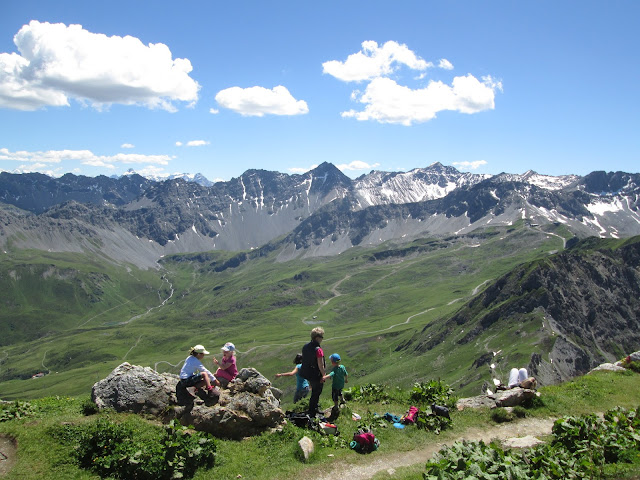 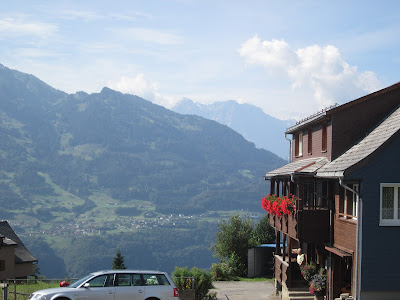 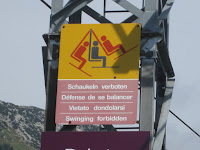 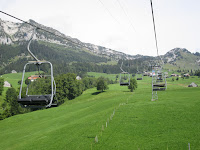 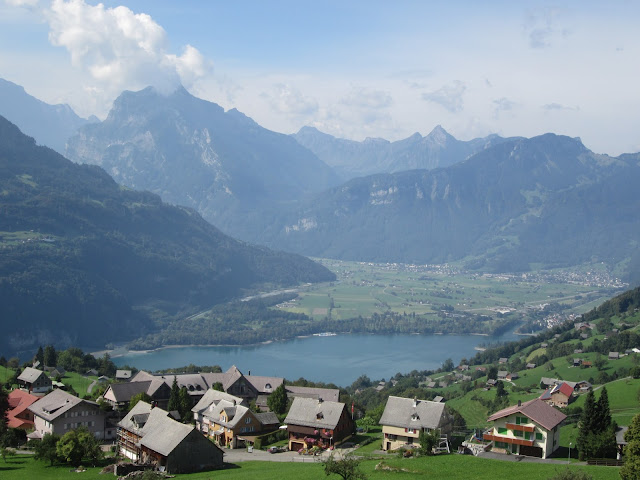 I will miss the sound of cow and sheep bells. We occasionally see our cow neighbors in Westport, MA, but they do not wear bells.

After Amden, Tom and I also walked around Bad Ragaz. We did not go in a spa, but found many fun sculptures. 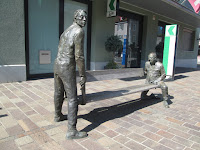 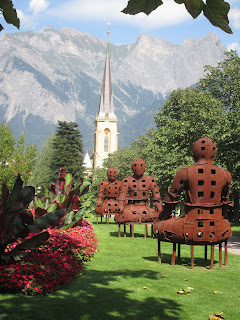 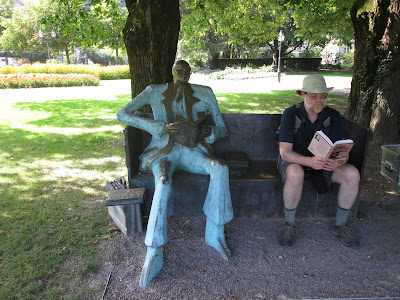 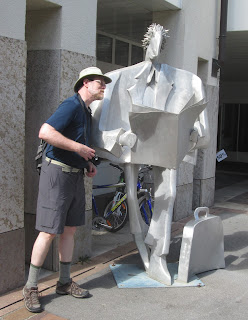 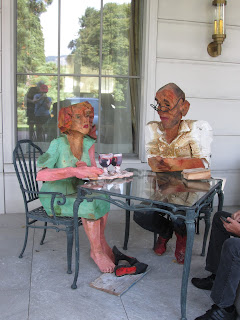 I will miss the ability to get anywhere with efficient and reliable public transportation. I will miss the convenience of short flights for European travel, but I look forward to using LA as a base for exploring the western states, Hawaii and Asia. I will miss my routine association with people from all over the world and hope to find an international group in LA.

Mostly I will miss the special friends I've made here. Some left before me which is normal when you're an expat. You do not always arrive or leave at the same time as the people who become dear to you. One of my special Zurich friends returned to the USA in June and she lives outside LA! I'm very excited that I will already have a friend when I get there. Keep calm Robin, I'm on my way! With the help of technology and social media, it is much easier to keep in contact  than in the past.


Petra and I sung the Faure Requiem together in 2013 and a friendship began. Ironically, neither of us has sung with that group since.  She has been a constant and willing resource for questions regarding Swiss culture.

Most recently, Petra and her family invited us for a fondue lunch after my last church service with the Posaunenchor.  I feel certain that we have made lifelong Swiss friends.

Tom's new position is Chief Investment Officer of Farmers Insurance. Since Farmers is part of the Zurich Insurance family, he will be expected to attend the annual CIO conference. It is always in July and always in Switzerland. Rest assured, I will travel with him. Knowing that I will be back every July until he retires makes leaving a little less painful.

Being a Jersey-girl and always having lived in the northeastern USA, I expect to feel a bit like an expat in my own country when I land in LA. I will try to "bloom where planted" and make the best of the new experience. I will continue to write, keeping the same blog name, largely because I don't know how to change it! 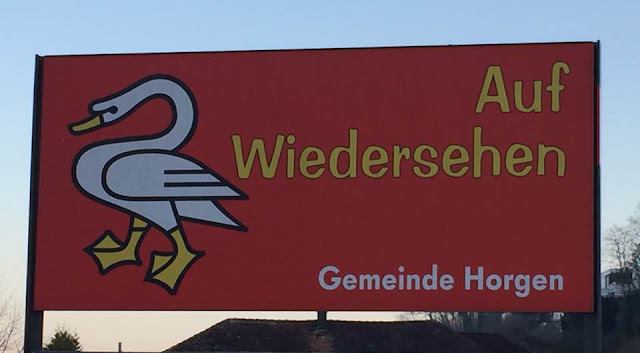 Auf wiedersehen Horgen and Switzerland. I love you both and will always have a special place for you in my heart.