Vogel Gryff takes place every year in January and is the most important festival of Kleinbasel (literally, small Basel) and the second most important event in all of Basel after Fasnacht.

I'm copying the English translation provided in a brochure I picked up at the train station. Even after reading it, I'm not quite sure of the meaning behind this strange event. Maybe you can enlighten me!


"Vogel Gryff" (the griffon), "Leu" (the lion) and "Wild Maa" (wild man) are the symbolic figures which represent the three Kleinbasel corporations zum Greifen, zum Rebhaus and zur Hären. At around 11 a.m. the Wild Maa boards a raft. While it drifts down the Rhine to the sound of cannon which call people to the river bank, he pays reverence to Kleinbasel by performing a dance. At a point downstream of the Mittlere Brücke he is awaited by Vogel Gryff and Leu. The three symbolic figures then make their way through the streets of Kleinbasel and perform their special dances until the evening.

It sounds like the three characters represent guilds, but which ones is the question. I did not find a good translation for the words used here.

Just to be perfectly clear, people were gathered on the bridge and river bank well before we heard the first cannon. 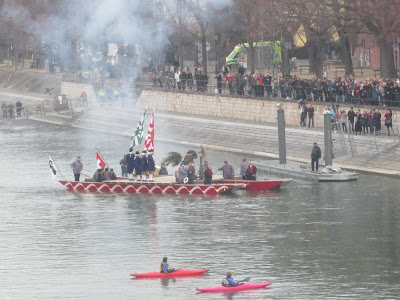 The Wild Man climbed out on the Kleinbasel side of the river. What was he doing that took him 30 minutes to get up to the bridge? We were impatient and cold! It was supposed to be mild and unfortunately, it was not! I was very disappointed with my choice of footwear. 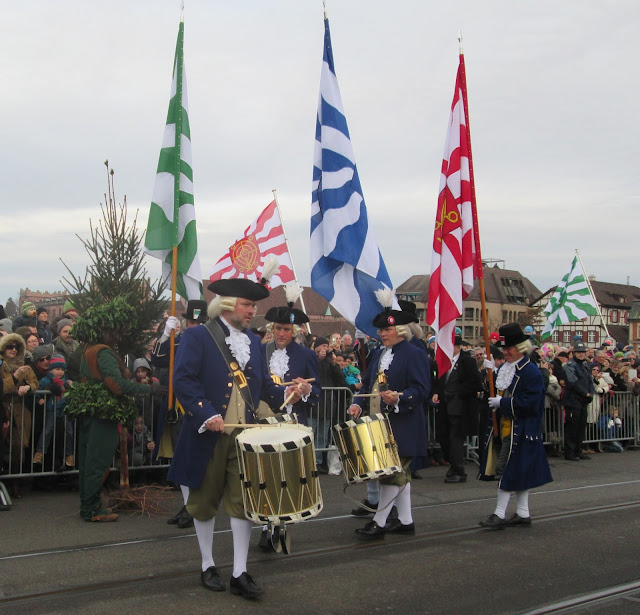 The three characters took turns "dancing" while facing Kleinbasel and away from the main city. The dance was nothing more than jumping around.


After they were done dancing and acknowledging each other, they left the bridge. The three would continue dancing their way around Kleinbasel all afternoon, but we'd had enough. We opted to find some warmth and nourishment in a restaurant NOT in Kleinbasel where the crowd was headed.

Since I'm a fan of the Tingueley fountain which is a "must see" in Basel, I've wanted to go the museum dedicated to his other works. This day presented the perfect opportunity.

Inside the Tinguely Museum we found many unusual, but interesting pieces. Most of them have a button to push to set them in motion. I can't attach video, only still photos. If you want to see them in action, I'll go with you to Basel! The city is definitely underrated.


I won't bother with the Vogel Gryff again, but I expect I'll be back to Basel. There is plenty I haven't explored and there's always the Basel Indoor Tennis tournament in October. It was fun in 2015 and is definitely worth a repeat visit!


On the Sunday after Ash Wednesday, known as "men's carnival Sunday", groups of singers and musicians in costume gather at dusk in the old town of Zug.

It used to be customary at the stroke of midnight on Shrove Tuesday for dancing and masquerading to stop. Male dancers would then invite their female partners for something to eat, and on the following Sunday, the ladies reciprocated by serving them coffee or wine with doughnuts. Friends and relatives were informed and came to serenade the young couple in return for doughnuts and wine. As they often asked for "meh Krapfe", or more doughnuts, and the custom came to be known as "Chropflimeh".

Since World War II, the traditional costume group of the city of Zug has organised this event, arranging for groups of singers to go to the homes of couples who would like a traditional serenade and who are willing to serve doughnuts and wine from the window for the privilege.
(http://www.zug4you.ch/chroepflimeh_singing___more_doughnuts,_love_songs_for_young_lovers.html)


I learned of this festival unique to Zug through one of the players in my tennis group. She leads one of the groups. Tom and I went to Zug and wandered around the old town following the sounds and noticing where others were gathered. We saw both of the groups that are pictured above. Obviously the photographer has a more sophisticated camera than I do and can capture better night-time pictures.

We saw several groups, some all men, some all women and some mixed. Costumes also varied in complexity or simplicity. 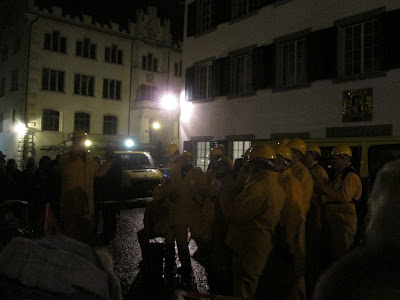 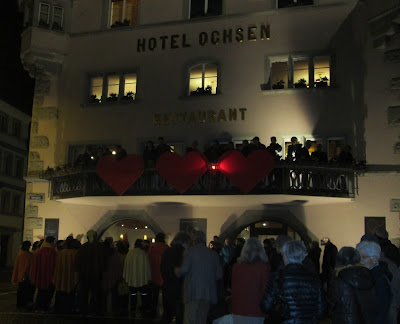 The group in capes serenades those on the balcony above. There is probably just one engaged couple joined by friends or family. 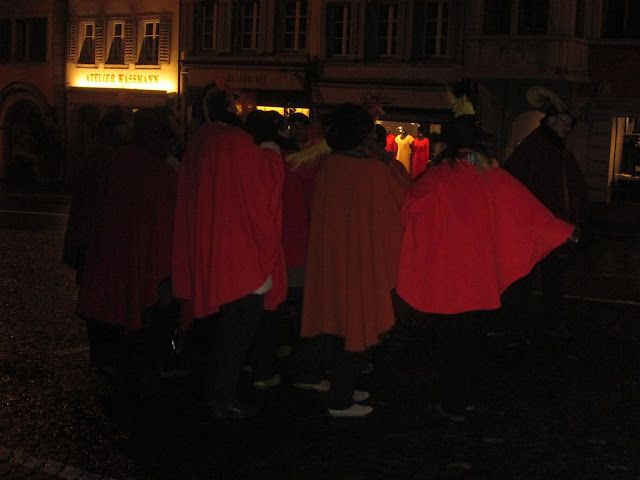 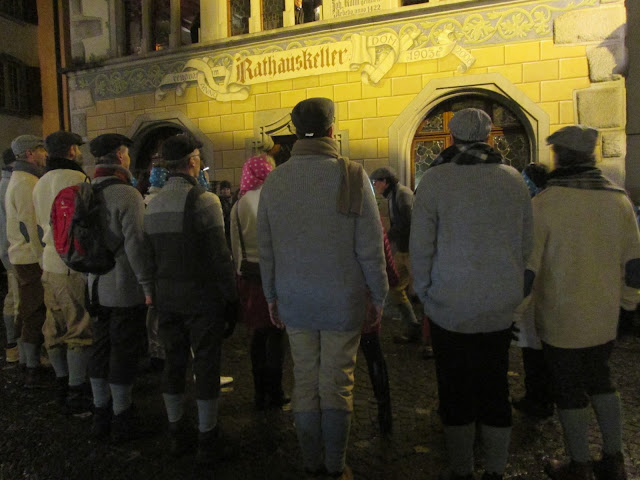 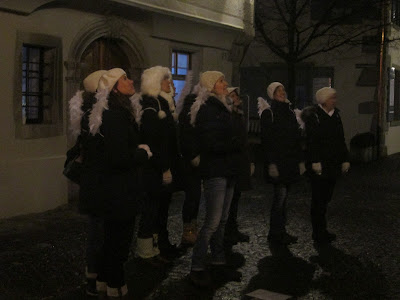 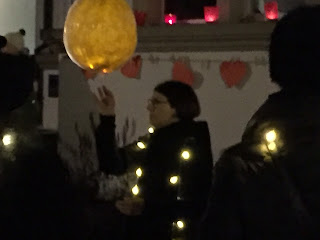 After about an hour of wandering, we still hadn't found my friend's group, but decided to head back to the car anyway. On the way, we found her! I was very pleased. They were by far the best sounding group. They had both men and women, we heard them sing in four different languages and their pitch and musicality was far superior. Kudos to you and your group, Heather! 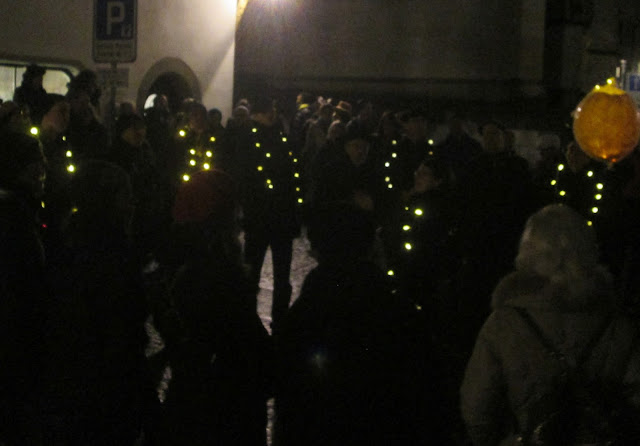 I am still making a point of experiencing as many Swiss festivals as possible. So far, I haven't stopped discovering new ones.
Posted by Unknown at 4:08 AM

Not quite a year ago, I wrote about a lesson in Swiss culture involving my neighbor and me practicing my euphonium (baritone horn). I have recently had another encounter.

I am very much aware of the allowed times for practice and stay within those hours. As I was minding my own business and finishing my warm-up around 5:30 one afternoon, the exterior doorbell rang. Looking into my screen where I can see whomever is in front of the outside camera, I could see my neighbor Nathalie. I knew she would only be ringing my bell about one thing: my practicing. She asked me to stop playing because she had a stressful day and she wanted quiet. Seriously! I told her it was an allowed time and she repeated. "Can I have one day with no music?" In the heat of the moment, I didn't think to say, "yes, every Sunday." No music is allowed then anyway. The conversation ended without me agreeing to anything. (just for the record, there are many days when I don't play my instrument in the apartment or at all!)

I called Tom at the office to see what he recommended. If we're going to have a feud, he at least needs to know and be prepared. He encouraged me to go back to my rightful practice time. I hadn't played more than another minute or two when she rang the outside bell again. I answered with "what is your problem?" She repeated her same request. By this time, I was so mad I was nearly shaking so any peaceful music wasn't going to happen anyway. I told her we would come down and speak to her when Tom came home.

We were able to walk down the two flights of stairs inside our building to her door. (yes, two flights. She does not live directly beneath us.) We did not go outside to ring the bell like she had done. She clearly had been trying to avoid speaking face to face. She admitted that she has no right to prohibit me from ever practicing (implying she would if she could), but she doesn't like music. Tom said "you don't like music?" "Not that music." She repeated that she'd had a stressful day, but we did not agree to change anything. I am not going to plan my practice around when she is out of the building. I will abide by the rules (including not playing during the holy lunch break), but not bend over backwards for her.

We considered advising the landlord as we did the last time, but opted against it. I've made a note of when this happened. If she tries it again, I will not answer the door, but will instead  advise the landlord.

This event happened to coincide with plenty of political advertising for the upcoming referendum vote. People can send in their ballots any day before the February 28, 2016 deadline. Of course, all people living in Switzerland want it to be a safe, secure place to live and work. From a glance, sending foreigners who are criminals back to where they come from might sound good.  But who is a criminal? Could be me! You could be sent packing after something as minor as two infractions or fines not being paid. (speeding ticket for instance or maybe even too much noise in the apartment) This could happen to any foreigner - even if the rest of your family is here or if your spouse is Swiss. You would also not be allowed back in Switzerland to visit them. Being an outsider here is not always a comfortable place to be. Do you think Nathalie dislikes my playing because I'm a foreigner? I think it sure doesn't help, but I'll never know.

Don't ruin our Switzerland.
We work together, Swiss and foreigners. The law should stay the same for all of us.
NEIN

My fingers are crossed for a "nein" victory on February 28th!

One other anecdote to share:
Swiss are known for telling people when they are doing something wrong (crossing the street when the traffic light says not to even if no cars are around, recycling on Sunday). Rules are more important than common sense. I had not experienced this personally until I was driving to tennis last week. The tennis club has parking spots in front, but not enough for the number of people that could be there at one time. There is a store across the street with a large parking lot where we've been told we may park when the tennis spots are full. The road leading to this spot is a dead end.

As I was approaching, I slowed considerably to determine if any of the furthest spots were free. They were not and I turned left into the store parking lot at the same time the car behind me honked. I immediately knew what the problem was. I had not used my blinker. I had considered it, but is it good to signal right and then go left? Going slowly is normal when approaching parking. With it being a dead end, I had no need to go faster. I parked my car and could see that the driver of the other car got out of his car and stood there looking at mine without going in the store. I didn't get out until one of my tennis partners arrived and approached my car. At that point, he was standing at the back of the car with his hatch open. Inside was a huge dog. I would guess the only reason to open the car was as an intimidation factor. He yelled over something to me in Swiss German which I really didn't care about. Margaret asked him what he said and he told us there were schools where I could go to learn to use my turn signal. This seriously happened!

For sure there are plenty of wonderful Swiss people and I am lucky to have met some of them. Then there are others who need to get over themselves and find something else to do besides watch or listen to everyone else!