Weekend in the Desert

The Mojave Desert region of California is only a couple of  hours away from our base in Chatsworth and is also home to the Indian Wells tennis tournament. Taking advantage of our location, we made a trip there in March spending two days watching tennis with a break for other exploration of the area on the middle day. 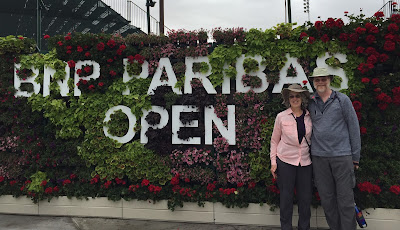 It was a bit cloudy on Saturday which was actually wonderful - not too hot.

Karen and David have been coming to Indian Wells for several years. This year we timed it so that our trips would overlap. Tom and I only had grounds passes meaning we could not go inside stadium 1 or sit in any reserved seats. This isn't a problem since there is open seating in at least part of the viewing area for all the other courts.  I was able to go inside stadium 1 because Karen had tickets for it and David wasn't interested. We got to see a bit of Serena's match. She is still rusty from childbirth and her time away, but is an amazing fighter. 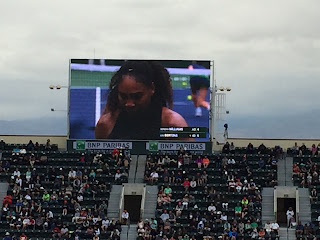 Serena is the figure in the foreground above. It was easier to see her on the big screen.


The grounds are well designed with many areas where you can find shade. Hopefully, they will increase the number of vendors that sell coffee next year. We had to wait quite a while for the afternoon caffeine fix. 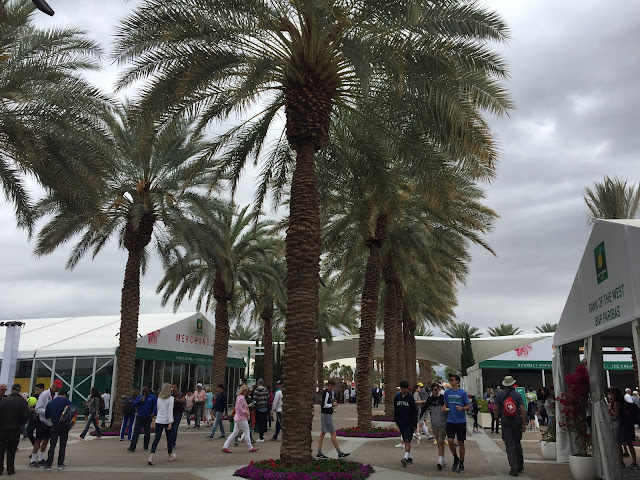 Depending which players you want to see, you may have to go to a court for an earlier match in order to make sure you have a seat. If a player is popular, lots of people will have the same idea. We went to court 2 to see Denis Shapovalov, but first the "twins". People with clothing from the same designer wear the same or at least very similar outfits.

answer: Marter, the lefty, is on the left and Berdych is on the right 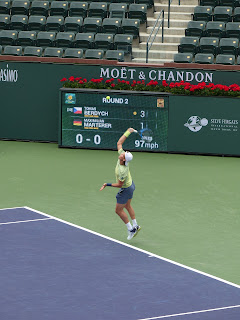 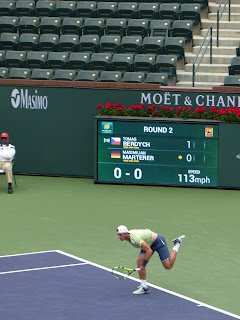 Sadly, Cuevas won, but at least we got to see Shapovalov play. I'm expecting he will have a lot of success in the future.

The great Rod Laver was also watching Shapovalov. How cool it must be to have someone of his caliber commend your game!


While we were watching on court 2, Karen and David had claimed excellent seats in the third row of court 3! Tom joined David there while I went with Karen to see Serena.

The most amazing match Tom and I saw happened after Karen and David left for the day. We took over claim to their third row seats. We definitely wanted to see Chung, but were not familiar with Lajovic. Chung won, but it was a long and very close three set battle. Chung actually had match point at the end of the second set, but let a ball go that he could have hit. It was not called out like he expected. He was right there and did not hit it! It ended up costing him the set, but an hour or so later he eventually won. There is a large Korean population in southern California and the crowd was cheering for Chung very enthusiastically. 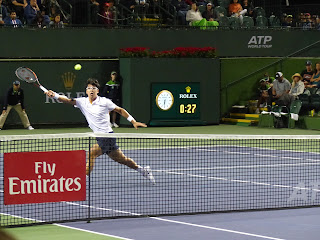 The power of their shots and both players' foot speed was amazing to see from so close. It's too bad someone had to lose - they both played extremely well. The match was won by excellent shot making, not errors. 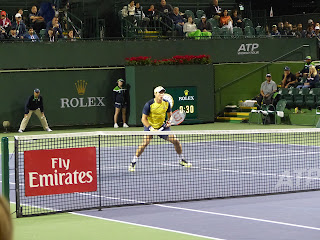 We planned on leaving the grounds at the conclusion of the match. Luckily for these players, rain did not interrupt their match. Unluckily for us, rain became heavy quickly and the play on all other courts was suspended for the night. That meant everyone on the grounds was leaving at the same time. It took us 30 minutes to get out of the parking lot! 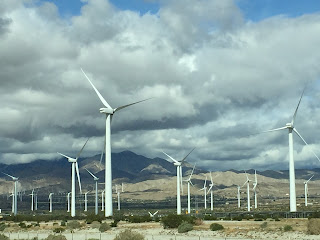 We wanted to experience more of the area than just tennis. Since there was cloud cover limiting views from the area's mountain tramway (which may have reminded us of Switzerland outings), we instead headed towards Joshua Tree National Park. The visitor center is actually outside the park, but there we were able to pick up a trail map. On the drive over, we rode past a huge wind farm. Impressive! 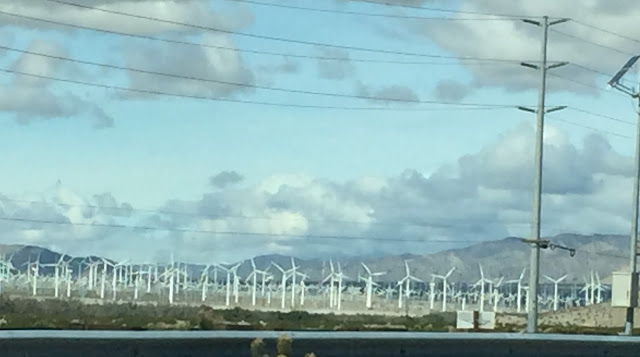 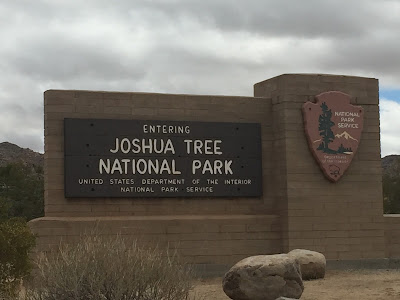 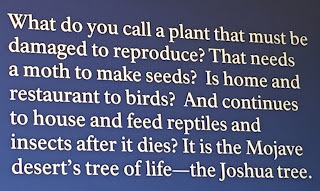 We had seen a Joshua Tree once last year, but this was our chance to learn more about them. 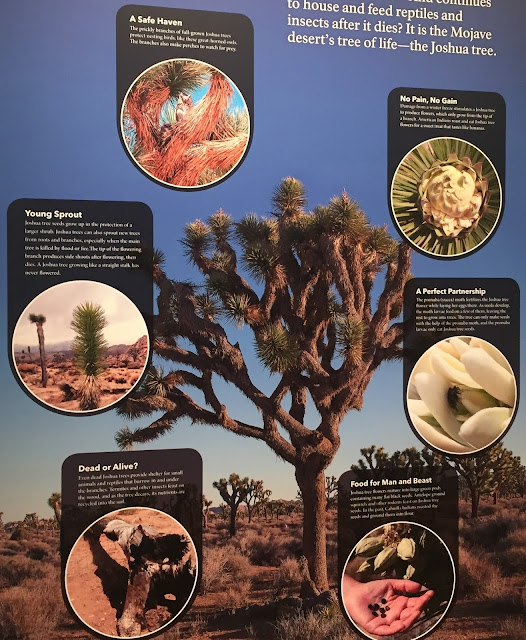 Shortly after entering the park, we pulled off the road for a picture. Unfortunately, there was sand on the side of the road and the car got stuck! We eventually found some things in the trunk that we could put beneath the wheels for traction. Reluctantly, I got in the driver's seat while Tom pushed. Phew, we got out. The car was now stopped in the road while we switched drivers again. Guess who would happen upon us right then? Yup, the Park Police.  Where were they moments before when we could have used some help? Anyway, we were scolded for stopping in the roadway. Not the best way to start our day in the park, but we carried on.
Besides the unique trees, the most common sight in the park was rocks - huge piles of rocks. 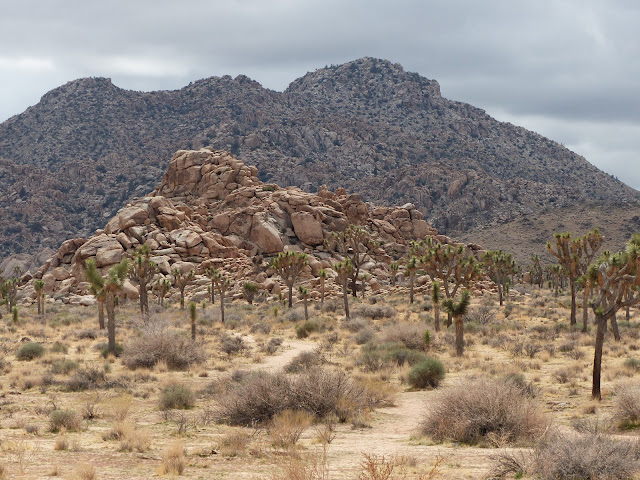 We saw remains of a ranch. Building a ranch in a desert seems like a very bad idea. 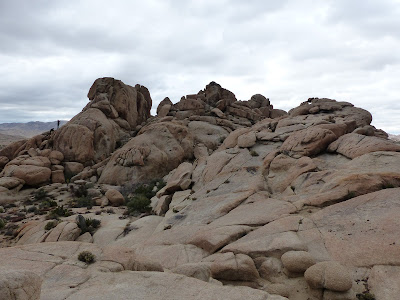 We saw plenty of people climbing the rocks. I can't relate to them. (I'm not going to go climb a mountain either!) 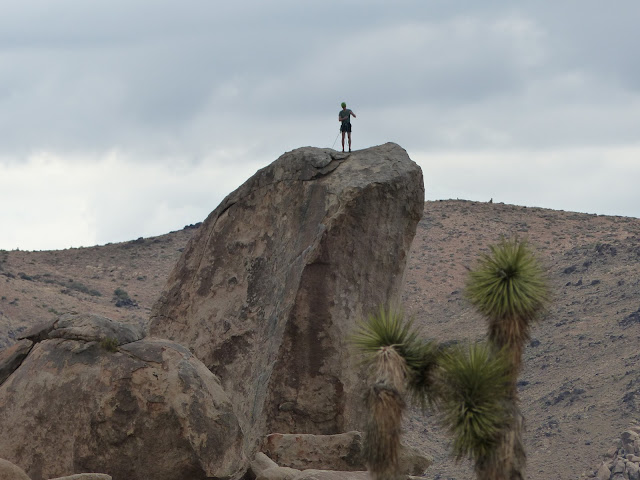 We had planned to take a short hike or two, but that didn't work out very well. We learned that the trails are very poorly marked and there isn't enough parking where trails are supposed to begin. 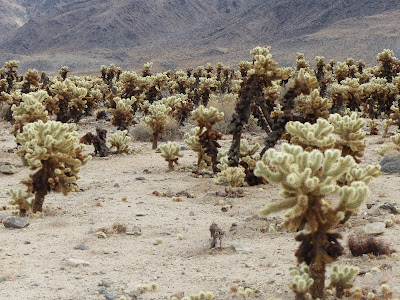 The cholla cactus garden is something to experience from a distance. If you get too close to the cholla, they try to attach themselves to you which can be very painful.We kept our distance. 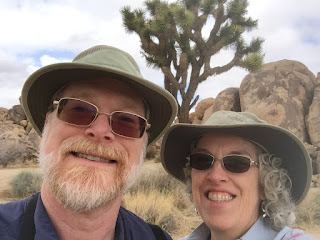 Cars can drive a diagonal road from the northwest corner of the park to the southern end. We did this choosing stops along the way. What the park information does NOT tell you is that if you enter the park from the southern visitor center, you will drive a long way before you see your first Joshua Tree! The park name implies that the trees are everywhere, but they are not. 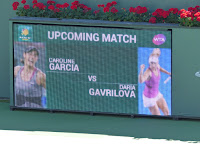 Day two of tennis was sunny and hot. Our plan was to watch women's singles and men's or women's doubles since there had been little of either on day one. Using our knowledge of the grounds from our first day, we headed back to court 2 - directly to where we knew there would be shade in a couple of hours. We had to bear the heat at the outset, but were rewarded later.

I was rooting for Gavrilova, but she didn't win. In the second match, my pick (Kerber) did win although she did not play particularly well. That is a champion - figuring out a way to win when you're not playing your best. Vesnina makes a loud "hiyah" yell with each shot. It gets old fast.

After the women, the plan was to move to another court to watch doubles. Plans were changed and we stayed where we were. Shade is golden. We saw Bautista Agut again after his win from the previous day. This time he lost to Coric who just could not miss. When the match was over, it was time to start the drive back home.

We definitely enjoyed the tennis and exploring this area of California. We expect to return next year, but we'll definitely pick a different place to stay. (Our airbnb did not provide us with a private bathroom and that was an unwelcome surprise.)
Posted by Unknown at 4:25 PM