Since I'm not in Switzerland anymore, it seems best to change my blog name to Transplanted! This way no matter what happens next, it will still be appropriate.

We landed in Los Angeles and spent our first two months in a temporary, furnished apartment close to Tom's office. Unfortunately, it was also close to the construction site for a subway that is planned to open in 2020. The construction went on 24 hours a day which means there were huge lights on all night and plenty of noise. Being in the city, there were also multiple sirens and honking horns outside the window every day. We couldn't get out of there soon enough. 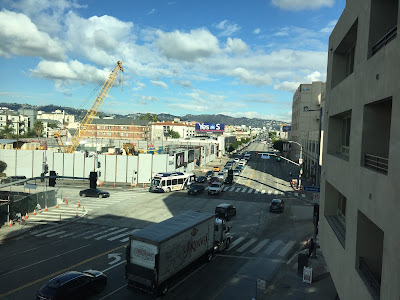 Here are some views from our window. Construction is on both side of Wilshire Avenue. I'm sure the subway will improve transportation, but for now, it's not a fun place to be.

Denali was understandably very frightened on our arrival. He made me very nervous by virtually disappearing in the apartment. I knew he had to be in there somewhere, but couldn't find him behind or under any of the furniture. Eventually on closer examination under the bed, I realized the fabric on the bottom of the box spring was ripped. There was also a section with a bulge. He was INSIDE the box spring laying on the fabric as though it was a hammock!


Right away, we had some opportunities to be part of the local Farmers family. Tom and the investment management department (and some family members) were guests in the Farmers box at an LA Kings hockey game. 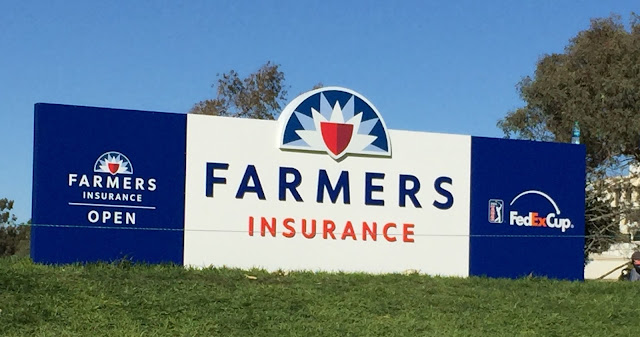 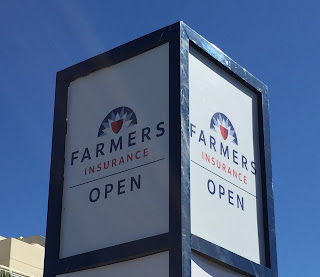 We were also invited to attend the Farmers Insurance Open (golf tournament) at Torrey Pines at the end of January. We're not golfers or golf fans, but that wasn't a requirement. So why not go? It was a beautiful setting and the food was plentiful to say the least (as was the liquid refreshment). There were no business meetings like some of the other trips that I've gone to. This was all fluff. Cool!

Not knowing anything about golf, we didn't care about following particular players through the course. We watched different groups tee off, putt or the drives that happen in the middle (don't know the right lingo obviously). We'd at least heard of Phil Mickelson so we watched him play a bit. Tiger Woods was in the tournament, but had done poorly the day before and was already out. 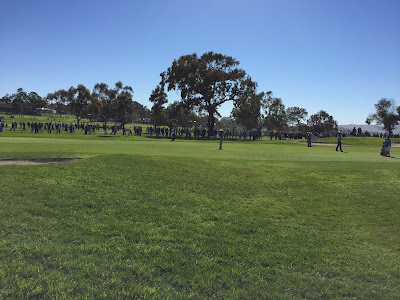 It was a lovely day for walking the course. 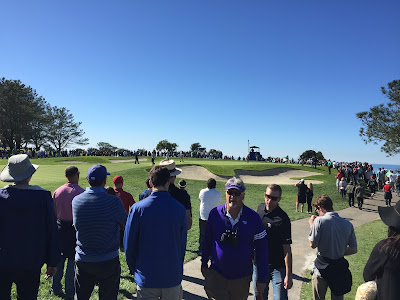 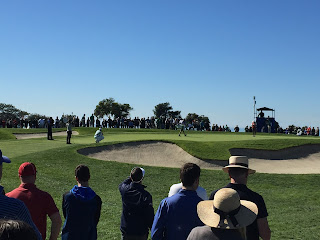 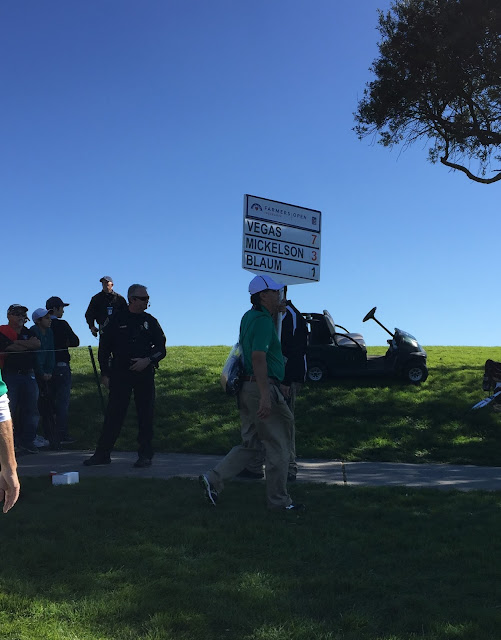 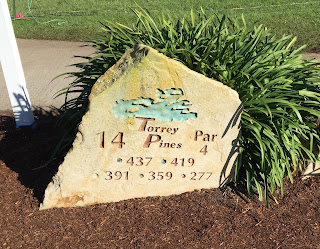 Each hole had one of these markers which give some people very important information. This is the 14th hole which is a par 4. The other numbers mean nothing to me.


We'd spent enough time walking the course on Saturday that we decided to take a walk in the neighboring park on Sunday. 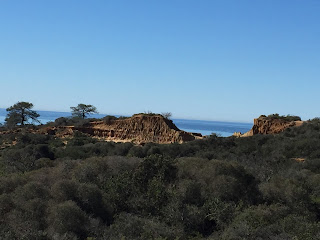 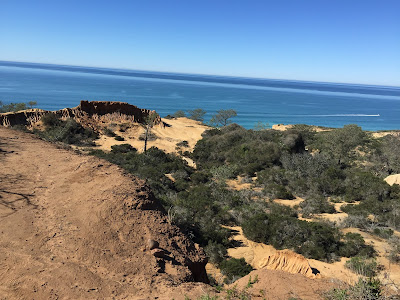 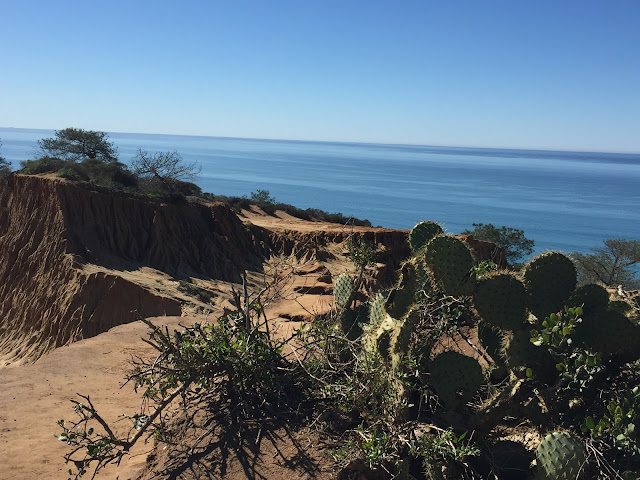 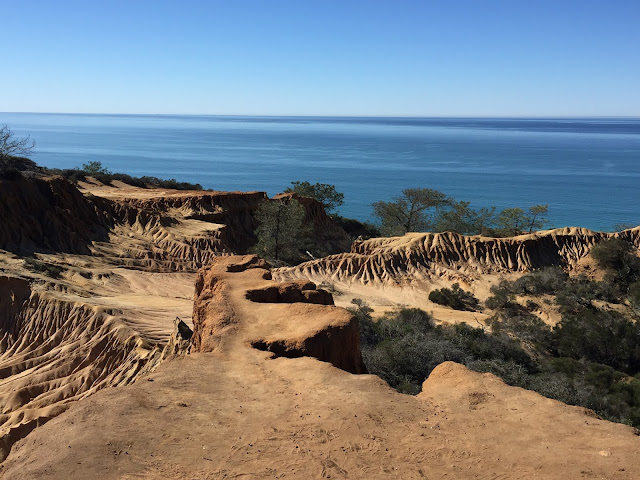 Look how blue that water is! Nearly the same color as the sky. 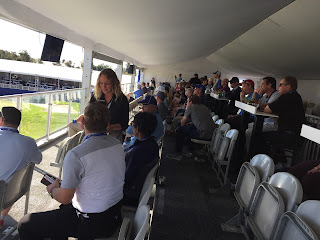 We made sure to get back to the golf course to see the last groups finish up. Farmers had a shaded viewing area where we could see the 18th hole.


The weekend did not make us golf fans, but we would gladly accept the invitation to go again. If we do, we'll get to see these very pretty stained glass doors of the hotel. 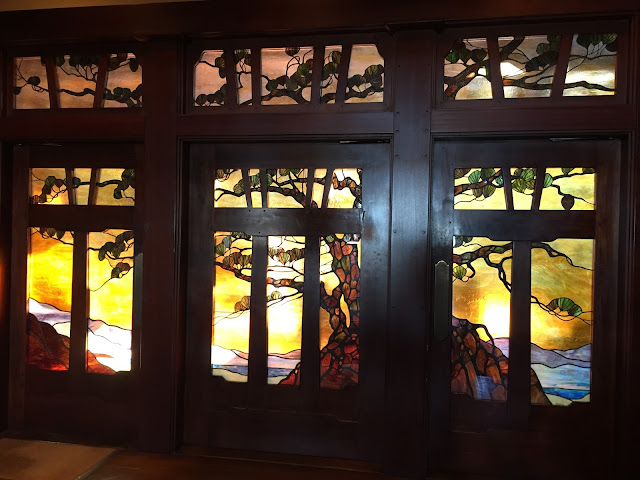