I already posted pictures of the views from our apartment. Now I'll let you have a look inside. Since Tom took over the apartment in mid-July, it has been furnished very sparsely with rental furniture. Our container is being delivered tomorrow. Before the apartment is loaded with boxes (cause of another very stressful day for Denali), I’ll show you how it looks now. 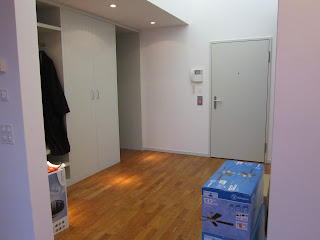 This door goes to the elevator. I had obviously “called it” and that’s why the button is red. The phone to the left of the door has a screen so I can see whoever rang the doorbell. I’m getting better at opening the door properly although people still don’t realize they can go on the elevator once I’ve sent it down for them. They insist they need the key. They are wrong. We’ve tested it, but I don't argue with them. 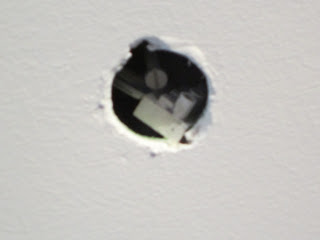 Apartments and houses are usually equipped with very few built-in lights. (above shows one of the many holes in the ceiling waiting for a fixture to be installed) Also, there is no air conditioning here (in residences) and they do get some hot days.  So one of our first weekends here, we rented a car in order to do errands including light shopping. See the blue box in the first picture?  We opted for combination ceiling fans and lights. We’ll save on floor space and eliminate the risk of a playful cat knocking over stand fans. Fans installed today. Unfortunately, one makes a rhythmic thunk on every spin. The electrician took it back down. We will have an adventure trying to return it.

Connected to the foyer is the “great room” for lack of a better term. It will have two seating areas eventually and the eating area. Now, it has a very uncomfortable couch and a table that arrived sticky and still is! Yuck. 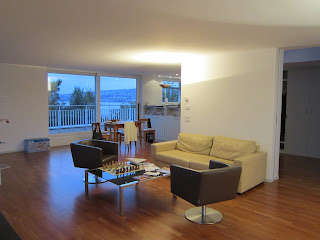 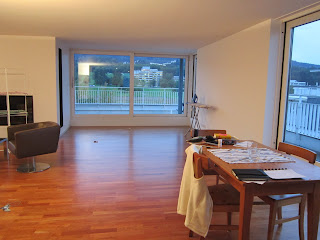 The glass table is really a desk – at least that’s what we ordered. This room will be transformed into a combination guest room and office. (sleeps two - and has a pretty spectacular view) 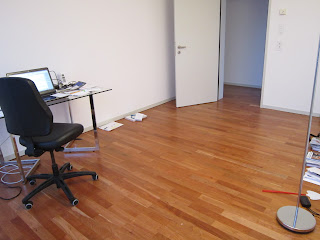 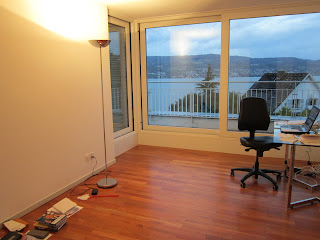 This is where I’ve been keeping myself out of trouble. Horns came over in the air shipment and gave me something to do - only during daylight hours since there is no light in this room. This will eventually have Alicia’s bedroom furniture in it. (sleeps two and has the same awesome view) 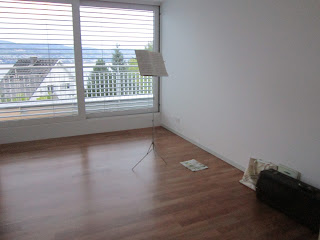 As you may have noticed by now, all the rental furniture is from the furniture capital of Ikea! Another of our errands was to go to Ikea ourselves. We ordered "closets" since these bedrooms lack built-ins that Americans take for granted. They will be delivered and assembled next week.

Becoming accustomed to European duvets and down pillows does not make me hate them less. I so look forward to my own bed, sheets and pillow! (yes, we have the view too!) 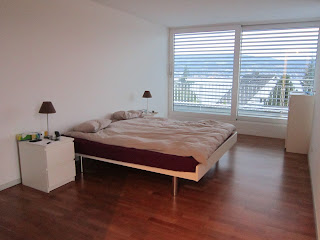 Once we have our goods from NJ, we can start making this apartment feel like our home.