Denali had a stressful few months before he could adjust to his new Swiss home. First, we moved him from NJ to Westport Point, MA. The purpose was to avoid him being underfoot when the NJ house was packed. Getting him to MA required a 4-5 hour car ride. He didn't cry the whole way, but enough...

Since he'd never been to the cottage before, it is safe to say he was "freaked out". He spent the first couple of days under the stairs in the basement. Evidence that he was scared: his food was barely touched. We stayed with him about 10 days before we returned to NJ for packing.

Denali was in MA for nearly 3 weeks by himself, but don't feel sorry for him. Our widowed neighbor and cat lover took excellent care of him. She came over 3 times a day and spent 45 minutes with him each time making sure he got exercise, lap time and of course food and (cold!) water. We came back to a very pampered cat.

Eventually it was time to make the transition to Switzerland. This was a bit harder. First, I put him in a harness because I'd been warned that I might have to take him out of the carrier in the airport. I sprayed the inside of his soft-sided container in advance with a product that was supposed to help him relax and sleep on the plane. I have no idea if it helped, but we gave it a try anyway. Sure enough, the TSA folks in Boston did make me take him out of the carrier so it could travel on the conveyer belt. I was very glad he was in the harness because he was so scared and wanted to run ... anywhere. He was very cooperative about getting back inside!

Once on the plane, we were lucky to have business class seats with plenty of leg and foot room. I put his carrier by my feet for take off and landing. Otherwise, I rode most of the time with his carrier on my lap. I felt sorry for him - I could feel his little heart racing. There was a little conversation among flight attendants about whether I would be allowed to have the carrier on my lap, but it worked out in my favor.

When we arrived in Switzerland, I only had to unzip the top of the carrier so that a scanner could be used to confirm that his microchip number matched our documents. (His long hair made this a little challenging.) Once we were through all the checkpoints, we could give a sigh of relief. We got in a car and made the trip to our apartment. From an earlier post, you know it was largely empty, but Denali made sure to explore every inch (or should I say centimeter?) of it. He found hiding places behind the dresser and under the bed.

It took a while for him to be comfortable here. The first few days, there were some deliveries which required the doorbell. It is startling and loud but it plays Mozart! (Beethoven's Fur Elise is the sound of our doorbell at the top of the elevator which is rarely necessary.)

We also have a different doorbell for the front door and for the stairway door. Both required running and hiding (and I would have to say he still does this). After a week or so, he was comfortable enough inside the apartment, but wanted no part of the balcony. I brought him out there on his harness and leash at first. He would slink around a bit and then run back inside.


The next scary event came in October. Strange men rang the doorbell and came to remove all the rental furniture. I didn't have time to put him in the laundry room before they arrived and then I couldn't find him. When they started dismantling the furniture, he was found! He came running out at breakneck speed. The men left and we had a totally empty apartment. I left Denali here and went to spend one night in a local hotel.

Tom and I returned early the next day and put him in the laundry room. He cried at first, but as soon as the group of movers came and made lots of noise with our furniture and boxes, he was quiet and glad to be behind a door.  The movers left for their lunch break and Denali started crying again. I told him "trust me, you do NOT want to come out yet." He stopped crying when the movers returned. Eventually the container was empty and our apartment was in total chaos. The movers left and Denali came out to sniff and explore again.

As we were unpacking and deciding where to put things, there were plenty of empty boxes to claim. Boxes are always great fun. 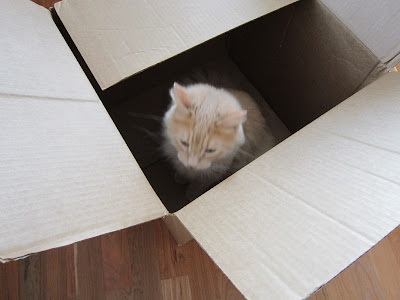 It's been about 5 months now since we got our shipment. I believe Denali is comfortable with his home. He has several favorite nap places. When you take so many naps, you need more than one spot!


an ever popular spot  - pay no attention to the cat behind the curtain! 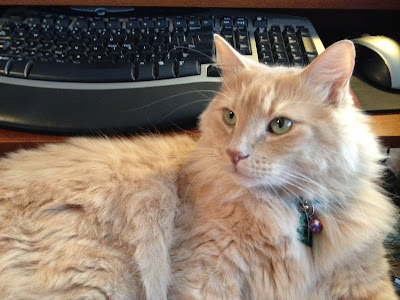 He also likes to be involved in whatever I'm doing - not always easy to type, but we are buddies.

One of the huge differences and adjustments for me is not having a basement room to enclose him at night. The laundry room is just too small and we know he would make a lot of noise. So he has the run of the apartment at night. I'm sure he is happy with that arrangement. There is often evidence that he has been somewhere or done something he shouldn't, but there isn't anything we can do about it. He is smart enough to behave properly during the day. It is a bit like having a young child again. He is nocturnal, but does allow us to sleep. Once the sun is up, however, he thinks we should get up and feed him. (Anyone familiar with Simon's Cat? Denali is related to Simon's Cat.) The sun is getting up earlier now and sadly so are we. Denali doesn't know the difference between weekends and the work week.

Here's his condo or pedestal in our bedroom. He spends a lot of the night here, but yes, we can hear when he jumps off to go "make his rounds". 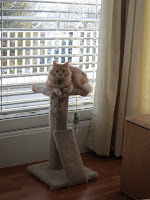 When the weather warms up, the doors to the balcony will be open again. Time will tell whether he will become a sunbather or not. We recently had a mild day and Tom was on the balcony. Denali decided to join him. When he heard a bird noise, he had to run back inside!

I'll close with a couple of videos of Denali's "cuteness". I've taught him to sit and catch a treat in his "hands" and then eat it. For a later installment, I'll try to get video of his expertise at catching ponytail holders.

Lucky for him, his transition did not include learning a new language. He still speaks Meow and we ignore him when we can get away with it.

For now, Denali has had enough attention. Where's the food?